Did you know the highest award in Girl Scouting prepares young women to be all-star employees?

By giving them training in real-world skills like budgeting, timelines, organization and public speaking, a Gold Award Girl Scout is ready to work independently, show initiative and follow direction right out of high school. These foundational skills translate to high-performing employees you can count on time and again.

Many of you are already asking: what’s the Gold Award and what makes it so valuable?

The Gold Award represents the highest achievement in Girl Scouting. This prestigious honor is awarded to only 5.4% of eligible girls. You have probably heard of the Eagle Scout, the highest award in Boy Scouts. It’s interesting how the Eagle Scout award is pretty ubiquitous. It’s difficult to find someone who grew up in the U.S. who doesn’t know what it is—even if you don’t know any Boy Scouts.

But there are fewer people who know about the Girl Scout Gold Award. 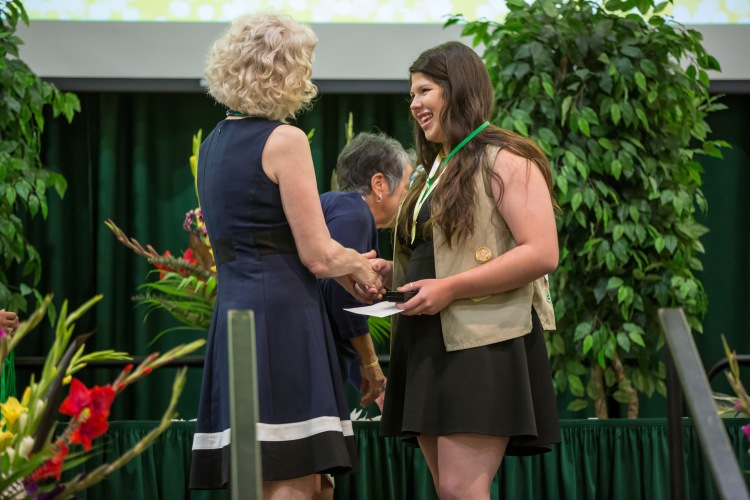 Maybe the changes in the name contribute to the lack of public awareness; I’m not sure. I do know that the girls who earn the award work very hard planning and implementing projects of sustainable community change. Those projects prepare young women for a lifetime of achievement, responsible citizenship, and self-confidence that translates perfectly into the characteristics needed for a valued employee.

In my experience, there are five main reasons that Gold Award recipients make the best employees:

#1)  These girls know how to assess a problem and develop goals to address it.

Gold Award projects require completion of a project that will solve a community problem and have a lasting impact on the world—or their corner of it.

They’re not concerned about painting a park bench; they’re concerned about how many benches there are in the park, who uses them, whether they are serving the purpose they were intended, how to obtain more if they are needed and then maintain the quality over time. When they are off to college, they’ve found someone to carry on the effort.

Gold Awardees learn to see the bigger, systemic issues and innovate in solving them. They go deep and make a mark on the community. That “big picture” thinking is essential in our workforce. 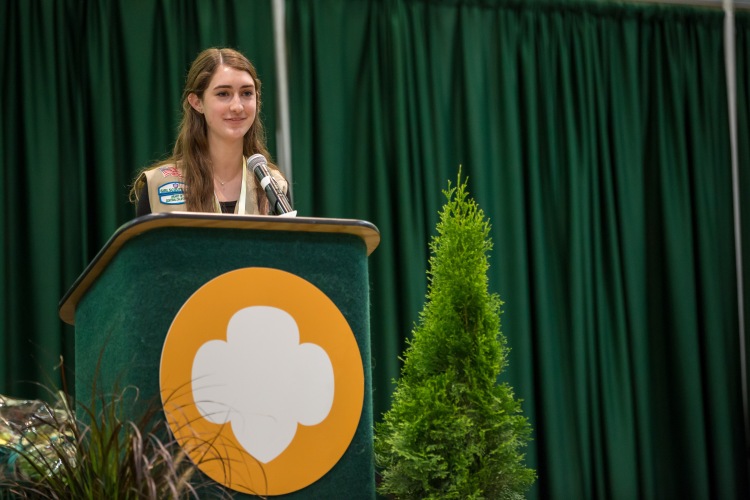 Their projects typically require them to talk with a number of different people in a variety of roles. They’re not just chatting; they are selling ideas, listening to diverse viewpoints and adjusting plans as needed.

From the school superintendent and mayor of their city to the janitorial team. They communicate effectively in writing and verbally. Just like in business, they’ve had to learn how to express their ideas to people who are very different from them.

They have also learned how to influence and negotiate. They might have to “sell” their idea to a school board or city council. They learn how to build relationships and then how to leverage those relationships to get work done.

#3)  These girls know how to think critically.

The Gold Award projects are designed based on the tenets of higher order thinking.

Girls identify an issue and investigate it thoroughly. They build a team to help them achieve their goals. They create a plan and then obtain feedback and input on that plan.

Of course, they take action. They know how to activate an idea. And finally, they educate and inspire others—an often times overlooked step! My highest-performing employees are not only leaders; they also encourage others to become leaders.

I’ve heard from girls whose initial plans don’t work out. They then have to go back and rethink the process—what worked; what didn’t. They make the necessary changes and then get back on track. They are motivated and don’t shy away from a challenge.

I love the employee who can take a project from A to Z with little or no handholding, don’t you?

#4)  In order for Gold Award Girl Scouts to get everything done within the timeframe, they need to be organized.

These are high school girls who typically have a heavy academic load. They often times participate in sports, student government and community service. They’re the girls who seem to be able to do everything.

Gold Award projects require a schedule and budget, much like most projects in the “real world.” Some girls apply for scholarships to help fund their work. They must be on top of their projects and work at all times. It can be taxing, but that’s why these girls are the best of the best. They figure it out. 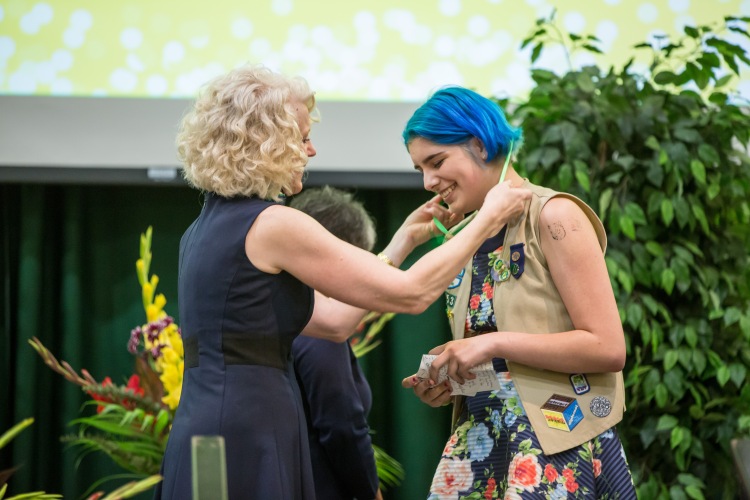 #5)  Gold Award GirlScouts know how to step out of their comfort zone.

Most girls enter the Gold Award process with a bit of trepidation. It’s not an easy process and typically ends up pushing their belief boundaries about what they think they can do. It requires girls to step into their courage.

So often, I hear girls say, “I didn’t know I could do this!” And having achieved it, they are full of confidence. They are excited to talk about what they achieved and how their work is making a difference in the community.

They realize they are capable of great things and they take this belief with them as they move through life.

One Gold Award Girl Scout that I’ve had the privilege to get to know is Leyna. She was a junior in high school when she received her Gold Award. Leyna is one example of an awardee whose work exemplifies all five of my points.

Leyna addressed the problem of novice drivers’ need to practice their driving skills in a safe environment. Her research pointed to the increased number of accidents on California roadways that occur due to the fact that other drivers on the road are unaware which drivers lack experience.

Her solution was to design, create and distribute “Student Driver” decals that let other drivers know there is a new driver behind the wheel. She could have stopped by distributing decals at her school; that would have been a very solid project. Instead, she showed extraordinary initiative in taking her idea many steps further.

Leyna created partnerships with the Impact Teen Driver advocacy group, local driving schools, and insurance companies for distribution of the decals. She then walked the halls of the California State Capitol seeking legislators who could get behind her idea and author a bill. She found an advocate in Assembly Member Kansen Chu (D-San Jose), who introduced Assembly Bill 2322, which would make the decals available to all permit holders.

Leyna had the confidence and courage to testify before the California Legislature in support of the bill. AB 2322 passed the Assembly Transportation on a unanimous, bipartisan vote; while the Senate Appropriations Committee didn’t approve the funds needed to supply the decals free of charge to all new drivers, Leyna has not given up. The bill is being reintroduced this year.

Leyna most recently developed a partnership with Mothers Against Drunk Driving (MADD) for distribution of her “student driver” decals. 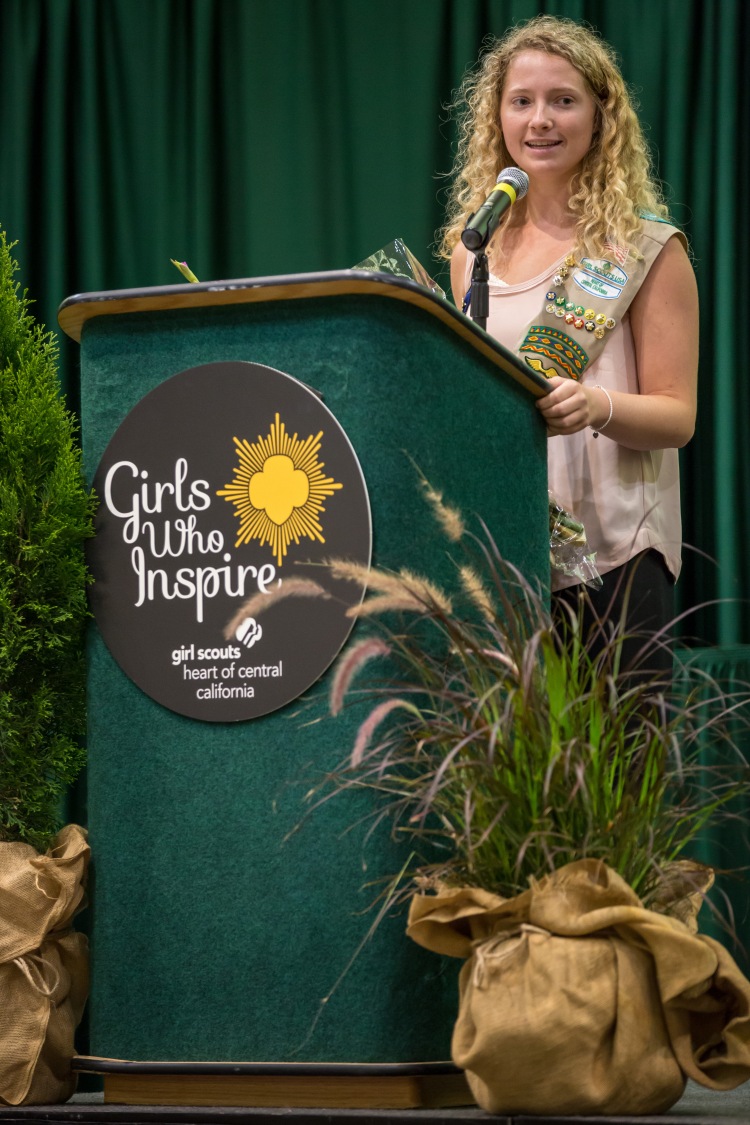 For her efforts, Leyna not only received her Gold Award, she was named one of Girl Scouts of the USA’s 2016 National Young Woman of Distinction. This is the organization’s most prestigious honor and is awarded to only ten girls nationally each year. As you can imagine, we at the local Girl Scout council are beaming with pride at her achievements.

While there may only be ten National Young Women of Distinction each year, there are tens of thousands of Girl Scout Gold Award recipients in the workforce. Perhaps you’re one of them.

These young women come into their careers well-equipped to demonstrate initiative, turn problems into opportunities and serve as leaders from the beginning.

It would be great if more women added their Gold Award to their resumes, the way men include their Eagle Scout status. I’ve just recently added mine, with pride!

The next time you interview a woman, ask if she was a Girl Scout and then take it one step further–ask if she earned the Gold Award. You’re sure to tap into a time when she established the foundation of responsible citizenship and learned to confront challenges and built confidence that has served her throughout her career.

Oh, by the way—I have dibs on Leyna when she’s ready to enter the workforce! Have you earned your Gold Award? Have a story to share? Email me! OR Tell us about it in the comment section below.

Linda E. Farley, Ed.D, joined Girl Scouts Heart of Central California in 2013 as its Chief Executive Officer. A lifelong advocate for youth development, Linda holds a doctorate in leadership from the University of St. Thomas, St. Paul. She has dedicated her career to creating opportunities for young people to learn and lead through programs in education, community service and the arts.
%d bloggers like this: